A Male Engineering Student Speaks Out for Women in Tech 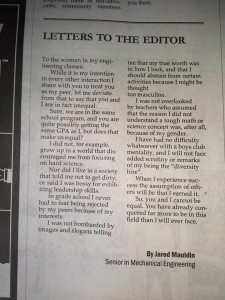 Have you seen the letter on Facebook? Jared Mauldin, a senior in mechanical engineering at Eastern Washington University, who also teaches technology to students in 4th to 8th grade, just published a letter in support of his female peers. The letter starts by addressing the fact that men and women are in fact, not equal, in the Tech and STEM space and then goes on to list why they are not equal.

Women, he says, have experienced a number of things that he, as a guy, has not.

Jared does a beautiful job of identifying the challenges that women face throughout their lives and recognizing the inequities between the genders from a young school age. His letter has been shared via social media and featured by Mashable and the Huffington Post.

Why all the attention? It isn’t as if he is saying something earth-shatteringly new. Jared says:

“Nothing I said was new, it has all been said a thousand times before. The difference is that I am a man,” he said. “Maybe by standing up and breaking the silence from the male side, I can help some more men begin to see the issues, and begin to listen to the women who have been speaking about this all along.”

That is what i’s going to take to make a change. Men need to not only recognize the issue and the need for diverse thinking and diverse teams but actually speak up.

I applaud Jared for his letter and for the media picking up on his comments. We need to spread the word, not just Jared’s letter but also the reports that are now coming to light showing why girls and women are not pursuing careers in STEM and how we can turn the tide.

Check out the Harvard Business Report that was published earlier this year explaining the five biases that keep women in technology from succeeding.

Jared ends his letter with a declarative statement about the true difference between men and women in technology and other STEM fields:

“So, you and I (his fellow female engineering students) cannot be equal. You have already conquered far more to be in this field than I will ever face.”

Thank you, Jared, for your letter and support of the women in your engineering program and women across all STEM fields.