If you are a fan of Shark Tank, you recently witnessed a tech-savvy leader in technology pitch a business designed to rethink words users share before the bullying starts.

Trisha Prabhu, a coder, entrepreneur, TED Talk presenter, and business developer stood in front of six sharks seeking $100,000 for 20% equity in her business. Her business, inspired by the true life events of bullying that led to the death of an eleven-year-old girl, is ReThink, an app that recognizes negative and bullying words prior to messages being shared via social media or texting. The app gives the writer a chance to rethink words they’ve typed before sending the message. 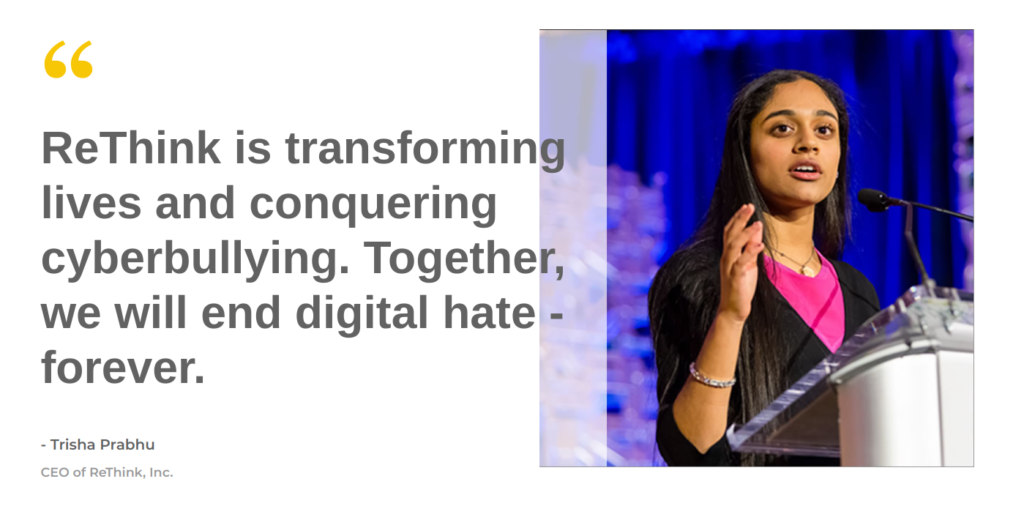 Here is a quick overview of how ReThink works:

The one surprise in this whole pitch? Trisha is only 16 years old. She started learning to code at a young age and when she was thirteen and heard about the girl who died she decided to do something about it. Using her coding skills, she wrote the code for the app that will allow participants to stop and rethink before sending a message that could be harmful.

“In a study we conducted of 1,500 people who had downloaded the app,” Trisha told the Sharks, “93% of those given the option to rethink and change their words did.”

Sharks Mark Cuban and Lori Greiner saw the potential and mission of ReThink and have joined Trisha by investing the $100,000 in her business.

They invested not only because of the great concept but because Trisha presented her business concept in a professional, confident manner. She knew her business segment, she understood the technology, she had already been approached by a wireless carrier to install her app on equipment. She didn’t blink when faced with harsh criticism from some of the sharks but responded with facts and solid business information. When Lori Greiner first starting talking with Trisha to offer her support she said:

“You are someone that the competition says each morning- oh crap she’s up and awake – look out.”

Watch this TedxTeen Talk where Trisha shares the mission she has for stopping cyberbullying at the source before the damage is done.

Ending Online Hate Before The Damage Is Done

Trisha is a girl in technology striving to make a difference in the world. She had a vision and a dream and worked to make it come true. One of the most touching moments, as I watched Trisha during her Shark Tank segment, occurred after she had secured her financial banking. She left the “tank” to find her father waiting in the wings.

He was emotional and clearly so proud of her and her accomplishments. This is a father who understands the importance of supporting and encouraging his daughter in her efforts. I have to believe that some of her conviction and poise come from the support of her father, as well as the rest of the family, have provided over the years.

I believe strongly that fathers have a unique role in helping girls in technology from a young age. My article, How Dad’s Can Help Girls in Technology, has been one of the most read and shared that I’ve written. It clearly resonates with fathers who want to know how they can help inspire their daughters to take an interest in STEM fields from a young age. It also shows fathers how to help elevate women into positions of leadership within their own business.

I applaud Trisha Prabhu and her success, both with the ReThink app but also her success in obtaining investors. I am putting her name on my list of girls in technology to watch.

The movement that Trisha began when she first appeared on Shark Tank continues to grow. Trisha first appeared on the popular entrepreneur show in 2016 and since then her app, her business and her passion for ending cyber-bullying continue to grow. She has appeared on Wired, Steve Harvey, Good Morning America, US News, BBC, INC. and more. ReThink Words is also expanding across the country through the development of ReThink Chapters.

Trisha Prabhu is now 18 and working on spreading her message globally. From her website we learn:

Trisha is working on rolling out ReThink™ in various international languages to stop online hate around the world. As a global leader and a change agent, Trisha is a strong believer in the power of advocacy. She has spoken at several global platforms, universities, schools, and organizations to raise awareness about the silent pandemic of cyberbullying and engage adolescents to spread positivity and tolerance around the world. She has also used these platforms to advocate for the power of STEM education, especially for young women. 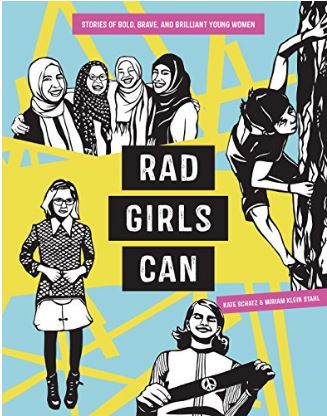 Trisha is also featured in the new children’s book that hit stores in July 2018.  Authors Kate Schatz and Miriam Klein Stahl have highlighted inspiring teenage girls in their new book, Rad Girls Can: Stories of Bold, Brave, and Brilliant Young Women, which feature stories about women who have excelled in typically male-dominated sports or have spoken out against injustices in the world, like Trisha Prabhu, 18, who created an anti-cyberbullying app.

Just a reminder that the ReThink app is free for all phones and is a great plug-in for parents to install on their children’s phones. Frankly, we can all benefit from the opportunity to rethink before we send!