The Gender Pay Gap – Women in Tech Close the Margin

We have all heard the news; women earn less than men and in most industries that difference is significant. Equal Pay Day, recognized on April 14 each year represents the number of days into a new year that women and minorities have to work to earn equivalent to what a man earned the prior year.

That is just so disappointing.

In a related note; a woman will now grace the face of the Ten Dollar Bill effective in 2020 in recognition of the 100th anniversary of a woman receiving the right to vote. I just saw a meme on Facebook that asks the question:

If a woman is now on the Ten Dollar bill will that mean that it is only worth $7.70?

Happily, the pay gap is not as significant in the world of IT. Women in technology fields are earning almost the same as men. Take a look at this chart from Career Watch: 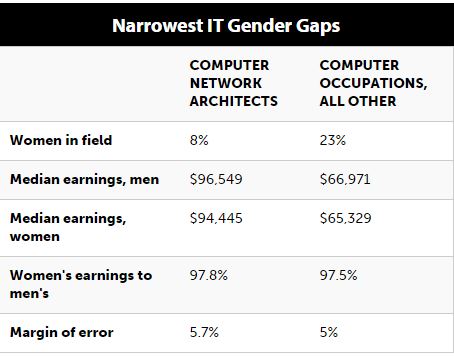 Network architect is one of two IT-related occupations to show up on Money’s list of the 25 careers with the smallest wage gap between men and women, which the magazine compiled in observation of Equal Pay Day on April 14.

The other IT-related job category was “Computer occupations, all other.” It’s worth noting that for nine of the careers on the list, women on average earn more than men.

The American Association of University Women (AAUW) has done an amazing job of explaining the differences in the pay gap, even in the world of tech, and also offering suggestions for how to decrease the margins. Here are some of their findings:

• Women in every state experience the pay gap, but some states are worse than others.

• The pay gap is worse for women of color.

The gender pay gap affects all women, but for women of color the pay shortfall is worse. Asian American women’s salaries show the smallest gender pay gap, at 90 percent of white men’s earnings. Hispanic women’s salaries show the largest gap, at 54 percent of white men’s earnings. White men are used as a benchmark because they make up the largest demographic group in the labor force.

• Women face a pay gap in nearly every occupation.

From elementary and middle school teachers to computer programmers, women are paid less than men in female-dominated, gender-balanced, and male-dominated occupations.

• The pay gap grows with age.

At every level of academic achievement, women’s median earnings are less than men’s earnings, and in some cases, the gender pay gap is larger at higher levels of education. While education helps everyone, black and Hispanic women earn less than their white and Asian peers do, even when they have the same educational credentials.

• The pay gap also exists among women without children.

AAUW’s Graduating to a Pay Gap found that among full-time workers one year after college graduation — nearly all of whom were childless — women were paid just 82 percent of what their male counterparts were paid.

Following are their recommendations to make a difference in the pay gap:

In future articles will we explore further the best ways to negotiate a more appropriate salary. In the meantime, check out this listing of the best places to work in the field of IT. There’s also this compact list of the 56 large, 18 midsize and 26 small organizations that ranked as Computerworld.